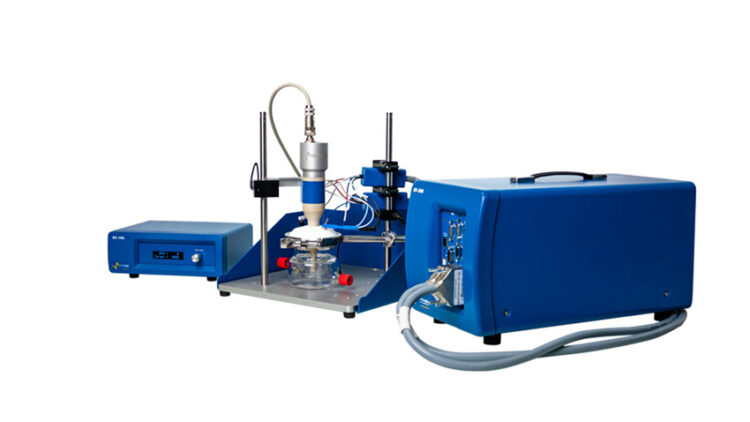 The RRDE is the latest addition to our BluRev range of accessories and complements the Rotating disk electrode. The addition of a concentric ring to the BluRev RDE (Rotating Disk Electrode), allows the user to collect species produced on the disk. Homogeneous bulk reactions of intermediate species produced at the disk can be studied by comparing experimental data to theoretical terms.
One major difference between BioLogic’s RRDE and rival Rotating Ring Disk Electrode’s is an LCD screen indicating the both the desired and the measuring instrument’s rotation speed. This useful functionality can help users monitor experiments in real-time. Users can record both target and measured speeds in EC-Lab®, for future reference.
Another great BluRev Rotating Ring Disk Electrode feature is that users can easily program and perform a Levich and Koutecký-Levich experiment all in one go, using EC‑Lab®, and also exploit the new EIS element Winf for direct access to the diffusion coefficient.
BioLogic constantly looks to its users for information to help improve product design. One such example can be found in the development of the RRDE, which features a gas inlet to purge the inner part of the instrument’s body and prevent corrosion to its stainless steel shaft.
BioLogic invested significant effort in the RRDE design to ensure a maximal runout of the shaft of +/- 50 µm, ensuring a laminar flow of electroactive species to the electrode and the validity of Levich and Koutecký-Levich analyses.
A purpose built-enclosure compatible with both the BluRev RDE/RRDE for EL-ELECTRO cells is available, offering high levels of flexibility for experiment setups. Other cells are compatible with this enclosure with an adaptor cap.
The BluRev RRDE is compatible with bipotentiostats such as the BP-300 or the fast, sensitive and modular two-channel SP-300 and any potentiostat with an analog output.
Major applications for RRDE instruments include hydrogen production, depollution, electrochemical sensing and most notably hydrogen fuel cells where RRDEs play a vital role in generating fundamental information to help optimize the efficiency of the hugely expensive catalytic components (often platinum) used in their production.